In successive GBMOIM international conferences I had the opportunity to build a strong friendship and learn from Dr. Daniel Stran the method that bears his name, the technique of Drag and Resolution.

Dr. Stran has developed a technique, which owes its name to the method of implementation and effect involved. But fundamentally it is a complex methodology of the teno-myo-fascial aims to detect and treat the patology in the context of a disorder global, functional and segmentary of the spine.

It consists of a sliding maneuver (“drag”) through certain routes protocolized by Raymond Nimmo (1904-1986) to detect the Taut Bands and Trigger Points in strategic areas that have a strict correlation with the segment functionally affected. Unlike the Nimmo technique, Dr. Stran’s method uses a “sweet” maneuver applied deeply enough to work at the level of muscle fascia, but not beyond.

It applies following Cyriax teaching, transverse to the bone insertion to break the scar fibers that limit movement, and respecting those who maintain the right direction. Unlike classic deep transverse massage, is slipping without causing friction, with lubricating cream, not to be too painful. A better approach is achieved of the whole teno-myo-fascial group, taking advantage of the benefits of massage itself.

In my experience this is enough to achieve the therapeutic goal, first because it is at this level of depth which trigger most relevant pathological phenomena, and then (not least) to be well tolerated by the patient does not cause reactive antalgic contracture by the treatment itself.

The other effect the Technique looks for is a reflex or indirect action, by acting on Trigger Points or Tenders Points developed in the tense band. Maintaining the pressure at these points for a few seconds, is enough to block afferent pain stimuli that cause.
The action is enhanced in successive massages, solving the pathological conditions in the area. Reverses the fibrosis, improves muscle movement, turning off the the irritating focus, so that local conditions in the spinal segment tend to improve, beyond the etiology that triggered the process.

The therapeutic “resolution” is achieved and through these two mechanisms controlling the muscle tone. One directly with specific massage breaking the restrictive fibrosis in Tense Bands, and another way reflex or indirect, by blocking the irritative stimulus Triggers Points.
And as these elements are a pathological manifestation of intervertebral dysfunction, is an excellent technique to determine the segment in question, confirming the locoregional diagnosis we had determined by specific tests.

Finally, and in the absence of contraindications, is in the best position to apply Muscle Energy Techniques, Spinal Manipulation, Injections or other.
In those elderly patients with osteoporosis, and many other clinical situations where we can not perform other maneuvers, the treatment of soft tissue is a highly effective weapon to solve the functional box, and often with surprising results. 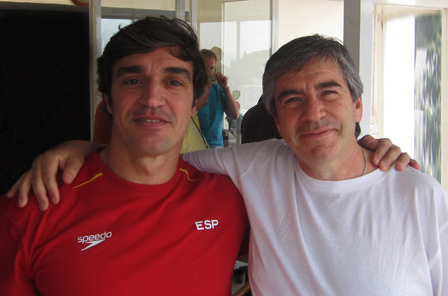 PhD in Medicine and Orthopedic Manual Medicine Specialist. Creator of the Drag & Resolution Method of soft tissue that bears his name.

Graduated as Doctor in Medicine from the Universidad de la Republica (Montevideo, Uruguay) in 1988, post-graduate courses in Internal Medicine from 1989 to 1992 at the same university and studied Manual Medicine with Prof. Arthur Manual Berhuet (graduate Palmer College), in Santiago de Chile 1994.

He currently serves on Spinal Orthopedic Medicine. Professor of Nimmo Technique course at the School of Manual Massage in Barcelona, directed by Prof. Dr. Jordi Sagrera Ferrandiz. He has spoken at numerous scientific international meetings of Manual Medicine.

Member of Orthopedic Manual Medicine Barcelona Group from its founding in 2003. Belongs to the Medical Union of Uruguay. Between 1988 and 1999 was member of the Department of Internal Medicine Assistance Center of the Medical Union of Uruguay. He worked as a clinician in Internal Medicine and Zonal in CASMU from 1981 to 2011 and was a co-founder of the Polyclinic Hospital Hypertension Pasteur School of Medicine, University of the Republic.

Member of the Uruguayan Society of Osteoporosis and Mineral Metabolism. (SUOMM).